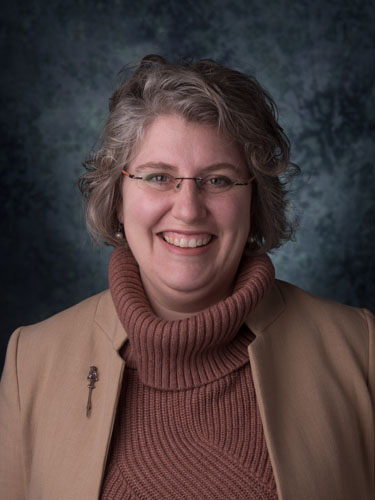 Ingrid Jordon-Thaden joined the Botany Department in November 2017, taking over the position of Garden and Greenhouse Director from Mo Fayyaz, who entered retirement. She took a few moments to answer some questions about herself and her plans for the future.

Can you tell us where you’re from and a brief summary of how you got here?
I was born and raised in Omaha where I had my first job in plants at a florist, with a greenhouse, when I was 15. For my undergraduate studies, I went to University of Nebraska-Lincoln and majored in Horticulture production, later switching to the science option. I absorbed any plant class available at UNL while a student there, spreading across many departments to do this: Horticulture, Range Management, Agronomy, Biology, Biochemistry, Chemistry, and Anthropology. In essence I created a Botany degree without the Botany department, as UNL lost their formal Botany Department in the 1970s. This vast array of classes led me to double major in Chemistry for a second, overlapping bachelor’s degree. After testing out all areas of botany from commercial production, organic farming, field botany, to synthetic organic synthesis of fungal communication compounds as a student, I decided to take an assistant lab manager position in the Chemistry department in proteomics (proteins and mass spectrometry). This led to a master’s program in the UNL Biology Department with Dr. Tom Elthon in corn mitochondrial proteins, while I also managed the undergraduate botany laboratory for three years (2002-2005). From 2006-2009, I decided to top off my formal education with a PhD in plant evolution, deciding to attend a German university in mustard systematics at the University of Heidelberg under Professor Marcus Koch and the American botanist, Dr. Ihsan Al-Shehbaz from Missouri Botanic Garden. While studying the arctic, alpine genus, Draba, I threw myself into phylogenetics, genetics, biodiversity and anatomy. This experience led to my post-doctoral work in polyploidy at the University of Florida under Drs. Pam and Doug Soltis with Tragopogon (goat’s beard) in 2010-2012. I then took a second post-doctorate in plant reproduction and population genetics at Bucknell University under Dr. Chris Martine with Australian spiny Solanum (wild eggplant) from 2013-2015. From 2012 to 2017, I also was a Research Botanist at the University of California-Berkeley where I continued my studies and field work on Draba, based out of the University and Jepson Herbaria. Prior to my arrival here in Madison, I worked as the lab manager for Dr. Carl Rothfels in fern phylogenomics at UC Berkeley from 2015-2017.

What attracted you to UW-Madison?
I have been attracted to UW Madison ever since I was an undergraduate as I always wished to be in a proper Botany department that specializes in studying all things “plant”. I just started sampling the music scene here in Madison, as I was involved in the Omaha music scene before I left the Midwest, and went to a 90s-style three-person grunge band which I thoroughly enjoyed. Moving back to the Midwest is a perk but was not a requirement for my career. I can say that I love the cold weather, and regular moisture!

What is the biggest challenge in curating the garden and greenhouse?
As growing plants are never a static process, the hardest part about curating the collection is the constant reproduction that also must be recorded. Unlike a museum of non-living things, a living collection produces offspring that need their own accession numbers, collection methods (i.e. seed harvest and storage), and record taking.

What plans do you have for the Botany Garden and Greenhouse?
I plan to bring the Botany Garden and Greenhouse up to date with some of the newest technologies that allow us to maintain a healthy world-class biodiverse collection of plants from all over the world. This collection is enormously valuable as an educational and research resource for many fields of botanical science from traditional systematics and morphology of plants, to genetically modified plants to study drought resistance. It is also a key resource for graduate students who are learning how to conduct experiments with living plant material. I am also eager to create a summer “Internship in Botany” for undergraduates which is currently a missing opportunity for the students in this country.

Do you have a favorite plant in the collection?
That is a tough one! I am currently watching the various pitcher plants (Nepenthes and Sarracenia) and Cupressaceae (Cypress Family). However, if I have to choose one, it would be the aquatic carnivorous plant we just acquired, Aldrovandra vasiculosa, pinwheel plant. All of its relatives are extinct and known only through the fossil record, and it this last species of the genus is now endangered in its habitats throughout the world.

If you weren’t in your field or academia, what would you be doing?
I cannot imagine what I would be doing if I were not in plants in one way or the other. The two fields I considered before college were chemical engineering or being an artist. I’ve also considered the life of a breakfast café owner.

What do you like to do outside of work?
Believe it or not, I like to grow plants, especially in aquaria and terraria, with small fish too. I also like to travel, hike, read, draw, listen to music, watch movies, and do yoga. I am looking to learn to sail now that such beautiful lakes are so ever-present and accessible.